Fill Out This Short Form OR Say Goodbye To Your Favorite E-cigs & E-Juice Forever! 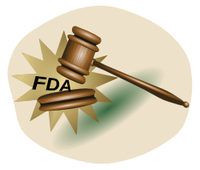 As I pointed out more than two years ago, when the FDA first announced its proposed deeming regulations on e-cigarettes, the corrupt government organization's regulations would effectively ban everything but convenience store cig-alikes.
Predictably, they ignored everything the electronic cigarette community had to say about the onerous rules and likely sat in a board room with their buddies in the pharmaceutical, tobacco and health care industries, guffawing at the pleas from those who have experienced the dramatic health benefits of e-cigs.
In short, practically everything remains intact in the FDA's final rules. This means that every single thing people are using today - e-cigarettes, e-liquid, batteries, clearomizers, coils, etc. - would be banned under the new rules. Only the tobacco industry will have the money to get their poor-performing convenience store products approved.
The laughable reasons they state for keeping pretty much every ridiculous rule in place can be found here. Feel free to plow through it if you can endure the 500 page document of evasion and disinformation. The need to accompany their ruling with 500 pages of lame excuses and spin instead of actual science is all you need to know about why this ruling took so long and why our government never accomplishes anything.
What the FDA doesn't admit in the laborious read is that they are paid shills for the pharmaceutical, health care and tobacco industries. Without the money from those industries, the FDA would have to close up shop. All three industries' profits have been hammered by the e-cig industry and as the FDA's sugar daddies, the unelected group of government officials needs to protect them (that's how our government works - follow the money). This is nothing new; just do a search for "FDA corruption" and you'll find more articles and examples than you can read in a day!
Fortunately, there are some reasonable people in Washington who haven't been bought off by the lobbyists for Big Tobacco, Big Pharma and the health care industry. Two pieces of legislation that would have a dramatic effect on your ability to use the e-liquids and vaping supplies you enjoy today are being debated by the U.S. House of Representatives.

Sponsored by Tom Cole (Republican - Oklahoma), House Resolution 2058 would amend the effective date of predicate products in the FDA's Food, Drug, and Cosmetics Act. As it stands now, the FDA will remove anything introduced into the market after February, 2007. This would wipe out every single electronic cigarette product being sold today.
H.R. 2058 would move that grandfather date to June of 2016 - the effective date of the FDA's new deeming regulations. That means all current e-cig products would be allowed and only new products would have to undergo pre-market approval by the FDA.

Also sponsored by Tom Cole, along with Sanford Bishop (Democrat - Georgia), the Cole-Bishop Amendment is very similar to H.R. 2058. It, too, moves the grandfather date for existing electronic cigarette products to the June 2016 date of the FDA's deeming regulations. The only real difference is that this is being attached to an agricultural appropriations bill, rather than making a change to the FDA's bill. It may have a better chance at passing, too, since it is sponsored by both a Democrat and a Republican.
Although the Cole Bishop Amendment has already been passed by the House Appropriations Committee, this DOES NOT mean that the amendment has been approved by the House. It only means that the funding for the agricultural appropriations bill has been approved. A full vote on the amendment is not expected until later this year and after that, it would need to be approved by the Senate (which has done nothing of note in years) and signed by the president.

Let Your Voice Be Heard - Fill Out This Very Short Form!

The primary lobbying group for electronic cigarettes - the CASAA - has put together an incredibly short form for you to fill out that will send a letter of support for both H.R. 2058 and the Cole-Bishop Amendment to your representatives. The President of the U.S.A. and each of your congressman will be sent a letter, demanding their support for both pieces of legislation.
Please click here to fill out this short but incredibly important form. Only your name, address, Email and phone number are asked for - all things required by the government. The rest of the letter is automatically generated and sent for you.