The Future of E-Cigarettes - Nothing But Cig-alikes 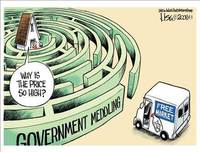 Those who have taken the time to read the proposed deeming FDA regulations or read summaries others have put forth all seem to have the same conclusion - "they're not great but they could be worse." Specifically, they cite the fact that the FDA did not ban internet sales or flavors as being positives.

According to a panel of industry insiders, anyone who thinks that internet sales of e cigarettes and e-liquid flavors aren't really included in the proposed regulations couldn't be more wrong. While those things may not be explicitly banned, the requirements in the regulations would effectively kill both.

Please set aside a big chunk of time - nearly two hours - and listen to this e cigarette industry panel discussion (click the orange arrow next to the title at the top - "Deeming Regulations Simplified" - to play).

In it, Kevin (last name impossible to find) from "VP Live" interviews some of the electronic industry's most prominent members about the new proposed FDA regulations. The panel of experts includes:

After reviewing the proposed regulations, it is clear that the application process will be so difficult and expensive, nothing you are using today will be in existence in four years time. We'll be stuck with convenience store cig-alikes, buying all of our products from the black market or just going back to regular cigarettes.

According to Bill Godshall, it will cost approximately $10 million to obtain the tests and documentation the FDA requires for each application. That's $10 million PER APPLICATION. Every e-liquid will have to have a separate application for each flavor and each nicotine strength.

A company selling just 15 flavors in four nicotine strengths would need to cough up more than half a billion dollars to get all of their e-liquid approved (15 x 4 x $10 million = $600 million). So, while flavors are not banned explicitly, effectively they are.

Just getting two flavors considered for approval - regular and menthol - in four nicotine strengths would run a cool $80 million - something only the Big Tobacco companies are likely to be able to afford. Since their cig-alikes are the only thing using pre-2007 technology, it's likely that what you see in convenience stores today will be the only thing you will find in four years time.

While many think that things containing e-liquid are the only products the FDA can regulate under the proposed regulations, since they are the only thing that may contain nicotine (defined as a tobacco derivative product), that simply is not the case. In an overreach of their real authority, the FDA has decided that they can also regulate any product that is "intended or expected" to be used with anything containing nicotine. In other words, that vMax battery tube is intended or expected to be used with cartomizers or clearomizers that may be used with an e-liquid that has nicotine. Therefore, the FDA says that the battery tube (and maybe even the batteries within it as well as the charger) are also subject to their approval (the cartomizer or clearomizer would, naturally, be an entirely separate product that would need to be approved).

Some people may believe that big companies like Joyetech, SMOK Tech, Innokin and Kanger will be submitting their products for FDA approval but that may never happen. That's a LOT of money to cough up per product only to HOPE for approval. Instead, it is far more likely that they'll ignore the FDA completely and let consumers order their products from non-U.S. distributors (i.e. the black market). The end consumer will bear the risk of their packages being confiscated by customs. Only a very small percentage of packages are actually inspected by customs - especially when they are small packages - so the chance of a package getting confiscated is pretty small.

So, do the new regulations ban internet sales? No they do not. Of course, if nothing you are buying now is approved for sale, does it really matter? No company will be able to get payment processing for banned products even if they did decide to take a chance violating federal laws. You'll just have to take your chance sending your money directly to China, probably via Western Union, hoping the company you choose to deal with is legitimate.

I urge EVERYBODY to block out a couple of hours to listen to this panel discussion. It is not all doom and gloom. There is a chance for vapers to fight these regulations but only if we are organized and act responsibly. The panel discusses what steps we are all going to need to take in the future (including making sure that Republicans re-take the Senate majority) as well as what you should (and should not) be doing now.

BeatNic Blog Quote of the Day:"Some of the FDA's own scientists have charged that politics, not science, is behind the FDA's actions." -Joseph Crowley